Cash Credit and Overdraft, two important words in the world of business and finance often used interchangeably are safely the most misinterpreted words to have existed. If we go about asking people around about their thoughts on them we will be nothing short of amazed to see that so many people, which include a lot of learned individuals as well, happen to think that these two words mean the same.

Although in reality there exists a striking difference between the two and must be known to avoid confusion.

Cash Credits are loans offered to businesses to meet their Working Capital Requirements and are provided on a short-term basis, whereas, Overdraft Facilities are funding offered by Banking Institutions to businesses whereby the banks allow these selected businesses to withdraw money from the stipulated bank even when their withdrawal exceeds their balance. Usually cash credit and Overdraft facilities are considered similar due to their nature of acting like a short term loan or a short term funding product for businesses. 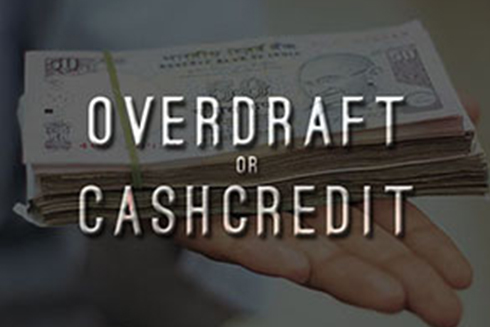 There are acute differences between the two which are as follows:-

Even though the two instruments are both funding instruments in their use the institution behind these instruments are different. While cash credits are offered by one business or vendor to another, overdrafts are offered by banks to its customers. Cash Credits are offered when a business makes sales to its vendor and gives them time to pay for the products or services sold. This is done to retain good vendor relations and improve revenues. On the other hand, overdrafts are facilities offered by banks to its esteemed customers whereby the bank sets a limit above balance according to the customer’s creditworthiness and allows him to withdraw even at a negative balance as long as they do not cross the limit. Overdrafts are given by banks to high goodwill customers so that they can deal with short term cash crunches in their business till the money starts to flow again.

The amount of credit or loan to be extended depends on different factors for the two. For a cash credit, the amount of credit extended depends on the volume or the amount of sales made. It is usually expressed as a fixed percentage on the amount or volume purchased by the stipulated borrower. Whereas, for an overdraft the limit of the overdraft depends the credit worthiness and financial standing of the individual or business concerned, and hence puts into regard the financial statements and security deposits of the borrower.

Borrower is the person who will be availing the loan of the facilities. There is a sharp contrast regarding who will be the borrower in the two cases. For a cash credit, borrowers can range from individuals, manufacturers, wholesalers, retailers, partnerships to companies. But to be a borrower of the bank one must have a bank account at that respective bank. The first and foremost requirement thus to avail the overdraft facility is to be an account holder at the bank from where you want the funding for your business.

The loan or short term fund instruments are sanctioned based to different aspects. Overdraft facility looks at the micro level concentrating on the firm or an individual credit history and hence looks into the financial statements before sanctioning. While cash credit is more focussed on the macro level and looks at the overall market trends and the trends followed by competitors and similar business before formulating its sanctioning policy.

Cash credits are given on the basis of the volume and money worth of the goods purchased and on the hypothecation of stocks and inventory of the borrower. It is given to retain customers. Whereas overdraft facilities are given on the basis of the borrower’s relationship with the bank, his credit worthiness and credit history. It is also given based on his other financial assets like fixed deposits with the bank or insurance policies or investments. Overdrafts are given to retain high value customers of the bank and earn high interest earnings from them by giving them the benefit of time value.

Here’s a summary of the differences between Cash Credit and Overdraft Facility:

Thus from the above differences we have learned that however similar they may occur, both cash credits and overdraft facility are two very different things as to what they do and how they operate. While one is a tool used in the day to day business transactions of businesses and vendors, the other helps to ensure a continuous cash flow whenever required. One provides with maintaining good vendor and customer relationship the other looks after the financials and keeps it floating. And finally as one looks at the macro aspect the other focuses on the micro thus maintaining the much required balance in an organization.

Both however contribute to the smooth running of operations in a firm by solving working capital issues of businesses thus acting as a smoothening lubricant to keep the rusty wheels running. They are the two most vital tools in the financial industry providing both short term and sometimes long term loans of the business. With all the above discussions it can thus be safely concluded that cash credit and overdraft facilities are indeed two DIFFERENT sides of the same coin called business.