If there is one segment of the economy that economists have been warning about since COVID-19 came on the scene, it’s the remittance market. That’s because migrant workers, who are behind the money transfers, are among the most vulnerable share of the population. Not only do they depend on work in a foreign country where they may not be fully assimilated yet, but they are also depended upon as a source of income and economic growth back home.

The International Monetary Fund (IMF) has provided an update on the state of the global remittance market, suggesting that things might not be as bad as originally thought. Indeed, while remittances are falling in many countries, there are pockets of strength in jurisdictions like Latin America.

The New York Times spotlighted Jesus Perlera, a migrant from El Salvador who has seen his income slashed as a result of the pandemic. Nonetheless, even when he was forced to tighten his belt, he didn’t stop sending payments to his mother back home. He told the Times, “If I don’t support her, how will she eat?” Perlera is part of a broader trend in which migrants have continued sending money transfers despite having to contend with layoffs and lower pay as a result of the pandemic. 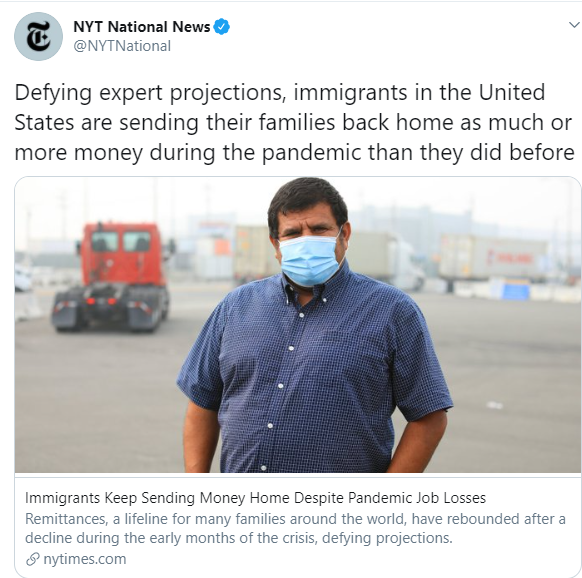 According to the IMF, It is not unusual for the remittance market to withstand the pressure of “adverse shocks in recipient countries,” and it appears to have done just that in the first half of 2020. This is largely due to the prevalence of options for mostly affordable remittance services, such as Sharemoney and Western Union. This does not mean that the migrant community hasn’t suffered from the lockdown-fueled economic slowdown — they have. But perhaps since the World Bank provided its gloomy outlook on the state of remittances, calling for a decline of 20% to low and middle-income countries, unexpected signs of strength have softened the blow.

The remittance market in 2020 has been a roller coaster ride, with payments rising and falling in response to the severity of the lockdown and social distancing measures as well as travel bans that governments set in motion. Overall, remittance flows have varied based on the country.

There was a broader trend in which they dropped off in March, when the pandemic was in full force, before finding their footing in May and then gaining traction once again. The chart below demonstrates how remittances in certain countries such as Armenia, Kenya, Georgia and Bangladesh dropped when the government restrictions reached their height and picked up again once the lockdowns and bans began to ease. 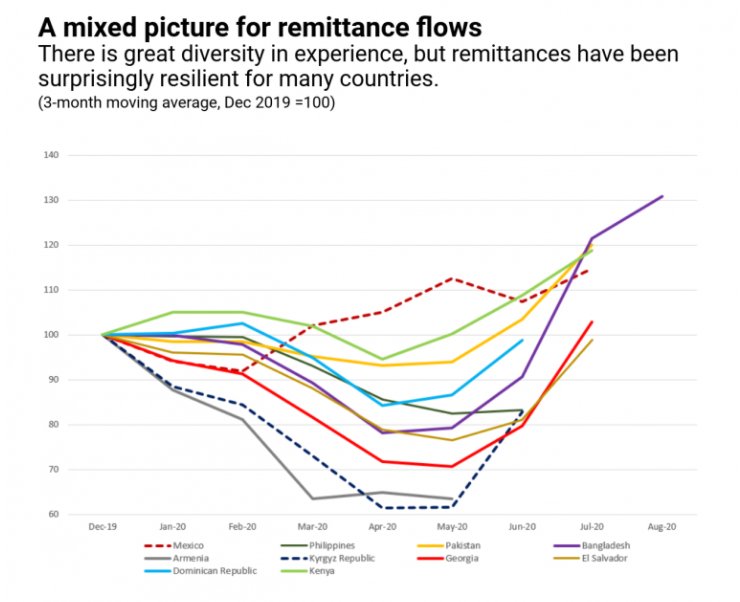 The rebound in remittance flows could also be fueled by pure demand from families in poverty-stricken regions during the pandemic. The IMF warns, however, that to the extent that migrants are using their savings to support their families at home, this pace of remittance flows could be unsustainable. The organization also warns that a second wave of the pandemic at host countries could throw a wrench into the recovery.

IMF Urges Countries to Step Up

The IMF is looking to both remittance sending and receiving nations to protect vulnerable migrant workers during this time of uncertainty. Migrant workers often take the jobs that citizens of host countries do not want in sectors such as farming and healthcare, and their lives become at risk as they continue working without the proper support.

The IMF would like to see host countries provide migrants with access to healthcare as well as basic goods and services. They point to jurisdictions that have been first-movers on this front, including Portugal, which has given temporary citizenship rights to migrants in the country, Italy, which has promised temporary work permits for 500,000 undocumented migrants, and California, which is behind an initiative to deliver financial assistance to undocumented workers in a public-private partnership worth $125 million.

Meanwhile, the remittance-receiving countries must play a role too by doing more to support families in need, particularly in countries where remittance flows have suffered the most. To prevent families from poverty, they recommend cash transfers and food aid for these households. In addition, migrants who are returning home during the pandemic should be trained to reenter the local workforce, while extending credit could give entrepreneurs an opportunity to start their own businesses.

The IMF would also like to see technology play a more prominent role in the sending and receiving of remittances, suggesting that it be “leveraged to the benefit of migrant workers and their families.” Digital technology and mobile payments, for instance, could lower the costs of money transfers, the average fee for which hovers at 7%, which means the receiving families would be able to hold onto more of the income.

Lastly, the IMF would like to see governments update existing policies to support more remittance flows without leaving the door open to fraud. They suggest easing the caps on the amount of money that can be sent via digital technology such as mobile phones and offering tax incentives to the money transfer service providers to make up for lost revenue as a result of lower fees.

There are 270 million migrants in the world, as of 2019, up by approximately 120 million people since 1990, according to the IMF.  Another way to look at it is that 3% of the global population are migrants. While over the past six decades that percentage has remained flat, there is a disproportionate share of immigrants across the global population. In advanced economies, the percentage of immigrants has risen from 7% to 12%, while for emerging and developing market economies, the rate has remained unchanged at 2% over in that period.

A recent IMF study found that migrants are a help, not a hindrance, to the growth of advanced economies. As a result, supporting migrants as well as the proliferation of migration trends after COVID-19 will play a part in the global economic recovery. While it’s too soon to determine the exact toll the pandemic has taken on migration flows, global lockdowns have “led to an abrupt stop in most migration as countries have closed their borders to non-citizens,” according to Margaux MacDonald, one of the authors of the IMF study.

MacDonald in a podcast warns that COVID-19 threatens to create a “sentiment of reticence and disbelief in openness,” which could interfere with migrant flows. On the other hand, there are other dynamics at work that support migration, such as fast-growing populations in low-income countries coupled with aging populations in advanced economies that could lead to labor shortages, trends that are likely to persist for the foreseeable future.